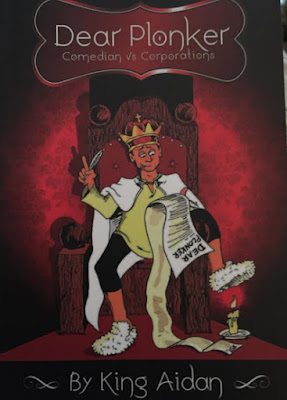 Aidan Killian is a comedian and ex-banker from Ireland. On stage he talks about what is important to him and what is going on in the world, adding humour to it so everyone does not leave the comedy club crying. He believes in co-creating a better world and realises that he doesn't have the answers, but that won't stop him trying.

Aidan joins John Gibbons on this episode of Alchemy to talk about his book 'Dear Plonker' which is the story of his sucessful rebuttal of the numerous letters received over a number of years from debt collectors, lawyers and corporations seeking unlawful payment for a variety of taxes and charges ranging from toll-roads and phone bills to banking penalties, all the while using comedy as his weapon of choice.

Aidan is interviewed by John Gibbons on his Alchemy Radio show, regarding how to deal with debt collectors etc. in a creative and amusing way, especially in your correspondence with them (should you choose to deal with them at all!).

Michael of Bernicia, Co-Producer of the upcoming Shockumentary 'The Great British Mortgage Swindle', gives an in-depth analysis of his family's recent battles in the courts, the control matrix, the powers behind it and just what their Modus Operandi has been in enslaving Humanity for Millennia...

The first hour deals in depth with Michael and colleagues' struggle against the banks and courts for recognition of the fraudulent nature of the current mortgage lending system.

If you don't fancy the complexities of that, then take a look at the second hour where Michael goes into the mysteries of the Birth Certificate, registration (or not) of your children, the real history of these islands, the people setting up Grand Juries, the UCT, detaching from the state, and lots of other good stuff...